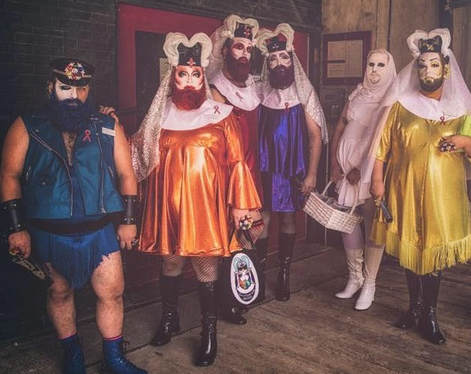 In October of 2015, we became a Mission House – a house proving its worth. More than 30 houses voted on us to become a Mission House. It was an honor to move that far ahead! Over the next year and a half, we continued our devotion to: community service, ministry and outreach to those on the edges, promoting human rights, and respect for diversity and spiritual enlightenment. We maintain the belief that all people have a right to express their unique joy and beauty, and we use humor and irreverent wit to expose the forces of bigotry, complacency and guilt that chain the human spirit.

In September of 2017, we became a Fully Professed House – a house operating fully on its own. This time, we had around 65 houses vote on us. This elevation, much like the elevation from Aspirant House to Mission House, was very relieving, exciting, emotional, and joyous. We did it. We made it. Our community and our fellow-houses believe in us and depend on us! While this is the final elevation of the house, NOW the real work begins!

In the year and a half we were a Mission House, we had the pleasure of meeting some wonderful Sisters and Guards all over the United States, many of whom we have kept in contact with. We have also met many individuals, families, communities, and groups that learn from us, and we learn from.

Over the years, the work and focus of that work hasn’t changed, but the underlying issues have. For example, lately it seems we talk more about gender than we do about sexuality. As much as we have moved forward, there is still a lot of work to be done. Some issues are put to rest, and new ones arise, requiring constant awareness, understanding, and devotion. There is a simple explanation as to why the Sisters have lasted all these years; there is always a need for people in the community to fundraise, to stand up and shine a light on things that are either being swept under the rug or just forgotten about.
​
We often get questions about our appearance and the reason behind it. Our structure is similar to the original Catholic nun tier system, with Aspirants, Postulants, novices and fully professed Sisters, and Guards. We must have a coronet, which is our headpiece, veil, name tag, jewel, and sometimes a collar. We have both festive and formal habits, but they are a habit. We do wear makeup, and we do stand out. We want to be the weirdest bunch in the room, so you don’t have to! We want to be approachable and well known. We want people to continue to be safe, and ask for a Bliss Kit or two. We want the people who need us to be able to find us.

We are The City of Fountains Sisters (CoFS), a modern order of 21st century nuns. Since our acceptance as an Aspirant House, we have devoted ourselves to: community service, promoting human rights, and respect for both diversity and spiritual enlightenment. We believe all people have the right to express their unique joy and beauty. When necessary, we use humor, wit, and wisdom to expose the forces of bigotry and guilt that chain the human spirit.

​We can't preach inclusivity if we limit our membership; anyone is welcome to join us in this mission.

So far, we have Sisters and Guards. Some other houses depend on Guards to keep them safe, carry their accessories, and provide a safe escort to and from functions, and while out in public. We are a little different. We believe our Guards should follow the same path of elevation as our Sisters, and work cohesively to accomplish goals and projects, bringing us all closer as a house.

​Whether you want to become a Guard, Sister, volunteer, or donate, you are welcome here! Use the "Contact" link above, and send us a message. Some nun will hear your call and respond posthaste.
Become A Member